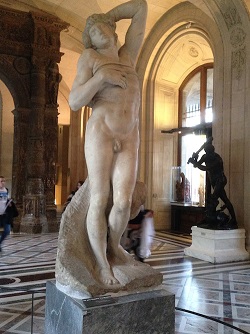 Gay Art and History at the Louvre Museum

A lecture by Prof. Andrew Lear on the history of homosexuality in the Classical Greek antiquity


A lecture by Prof. Andrew Lear on the history of homosexuality in the Classical Greek antiquity:


Gay Art and History at the Louvre Museum

The event is free, but registration is requested. You can register here.


The Louvre’s excellent Greek, Roman, and Italian Renaissance collections are full of works that refer to the gay side of their cultural moments, such as the museum’s *four* statues or busts of the Roman Emperor Hadrian’s lover Antinous and the most rapturously languorous of Michelangelo’s captives. The museum also contains great collections of French historical pieces and patriotic works of the Napoleonic period, and both of these also contain fascinating gay themed works. A gay tour of the museum turns up many surprises and speaks to us of many centuries of gay history.


Dr. Andrew Lear is a world renowned expert on sexuality in ancient art and the author of Images of Ancient Greek Pederasty: Boys Were Their Gods (Routledge 2008). He is also the founder of Oscar Wilde Tours, the world’s first gay history and art tour company. Oscar Wilde Tours gives gay art tours of the Metropolitan Museum, called “Gay Secrets of the Met” and will launch a gay tour of the Louvre this August as part of its Gay London/Gay Paris tour.