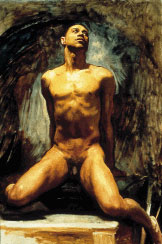 Professor Lear is offering a tour on March 30!

Professor Lear is offering another date for his extremely popular tour, “The Gay Secrets of the MFA,” on March 30, 2016.

Professor Lear offered this special tour of the MFA to the HGSC last May and due to popular demand is offering it again this year. We hope you can make it!

When:  Wednesday, March 30, 2016, at 6 pm.
Where:  Meet inside in the Carol Vance Wall rotunda (entry is free on Wednesday evenings).
Price:  $20.  You can reserve/prepay by clicking here. The event is password-protected; the password is HGLC. (Note the different password for this date!)